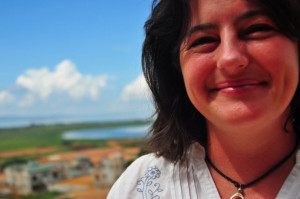 A Zimbabwean by birth,  and a Capetonian by adoption, Oxford-educated Isla Haddow-Flood is a writer, editor and project strategist who is passionate about harnessing communication technology and media platforms for the advancement of open access to knowledge; specifically, knowledge that relates to and enhances the understanding of Africa via the Open Movement (and especially Wikipedia). Since 2011, Isla has been working to Activate Africa. Working with members of the WikiAfrica movement, she has conceptualised and instigated #OpenAfrica, Kumusha Bus and WikiEntrepreneur. She has also been the co-leader of projects related to Wikipedia and Africa, such as Wiki Loves Africa (annual photographic contest), Kumusha Takes Wiki (citizen journalists in Africa collecting freely-licensed content). In 2016, Florence and Isla developed and ran Wiki Loves Women (content liberation project related to African Women), Wikipack Africa (an action kit for Wikipedians across Africa), WikiFundi (an offline editing environment that mimics Wikipedia) and WikiChallenge African Schools (that introduces the next generation of editors to Wikipedia).   >> Linkedin profile 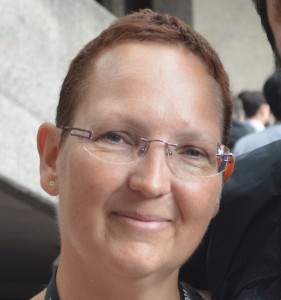 A Wikipedian since 2002, a former Chair of Wikimedia Foundation, Florence Devouard was born in France where she currently lives.
Initially trained as an Agricultural Engineer, she transitioned to non-profit leadership, intercultural project management, community building and skills transfer roles. She is a public speaker, writer, and a consultant. Above all, she loves to share her knowledge of new practices and online communities. She cares for language diversity and multicultural dialogue, and is a supporter of the open-source and free knowledge movement. In 2008, she was made a knight in the French National Order of Merit, proposed by the Ministry of Foreign Affairs as “chair of an international foundation”.
Since 2013, Florence is the co-leader on projects related to Wikipedia, Africa and Gender, such as Wiki Loves Africa (photographic contest in Africa), Kumusha Takes Wiki (citizen journalism to collect and create freely-licensed content in Africa), and Wiki Loves Women (content liberation project related to African Women). She is the product owner and lead of two open source software: WikiFundi (an offline editing environment that mimics Wikipedia) and the ISA Tool (a multilingual, mobile-first tool to add structured data to images). She also participated as the Scientific Collaborator at SUSPI to the Wikipedia Primary School SSAJRP research programme (developing and evaluating a system to assess Wikipedia articles for primary education in South Africa). Since 2017, she leads an annual education program in French speaking Africa, the WikiChallenge African Schools (that introduces the next generation of editors to Wikipedia).
Florence is strongly engaged in the non-profit sector. Formely chairwoman of Wikimedia Foundation (US non-profit host of Wikipedia), co-founder of Wikimedia France and of Wiki in Africa (a South African-based non profit structure that operates global initiatives in support of the WikiAfrica movement), she is also on the board of several other associations in the Open Movement, such as Ynternet.org (a Swiss NGO involved in e-citizenship), the OpenFoodFact organization (the association behind the open source database of the same name) and LSC-Legal Service for Commons (a French NGO founded to act as a fiscal sponsor for organizations that develop open source software, hardware and services).
Finally, Florence is an active member of les sans pagEs (a Swiss non-profit operating to reduce the gender-gap on Wikipedia in the Francophone world).
>> LinkedIn
>> Twitter
>> http://www.devouard.org/ 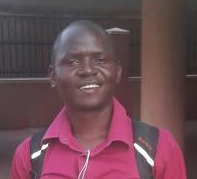 Douglas is an Information Technology Profession with a passion in Open Data, knowledge, and the Open Movement in relation to advancing resilience in social, economic and well being to various communities on the National, and global development levels.

He has been involved with Wikipedia from 2014 on the Wiki Africa’s Kumusha Takes Wiki project working with the Wikipedian in Residence to activate Wikipedia and OpenStreetMap Communities in Uganda.

Douglas has previously been the team lead and project Manager on the annual one-month wiki Loves Africa contest in 2015 and 2016. He is one of the co-creators/co-founders of the Wikimedia Community Usergroup in Uganda in 2017-to-date. >> Linkedin profile

Erina Mukuta is a wikimedian in the Wikimedia Community User Group Uganda. She has been part of several projects to increase content and knowledge sharing In Uganda through sensitization and training since the year 2014. As a result, Erina has built competence in coordinating training and meeting events. >> Linkedin profile 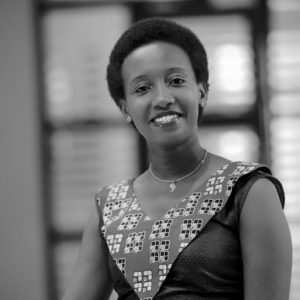 Maryam is a Tech-enthusiast working in tech space to create better opportunities for startups in emerging markets. Her journey began in Tanzania, where she was part of Buni Innovation Hub, a co-working space that encourages tech-entrepreneurship for early-stage startups.
Maryam has now expanded her geographical location, as she joined the largest platform for Technology and Entrepreneurship, Seedstars, which is present in over 85 countries in the world and 25 countries in Sub Saharan Africa.
Maryam is also passionate about community work and has been a volunteer for a couple of community programs, including the most popular Wiki Loves Africa, for the past three years and now leads a Wiki Loves Women in Tanzania, a program aimed to populate Wikipedia with the stories of the unsung “Sheroes” of Tanzania. >> Linkedin profile

Georges Fodouop is an informatician, systems and network administrator for Institut Français du Cameroun – Douala. Is a wikipedian since 2013.
Georges is very actively involved in various projects related to wikipedia in Africa such as Afripedia, WikiLoves Africa and training to discovery and contributing to wikipedia.
Linkedin profile 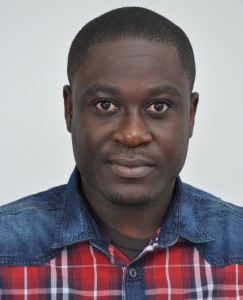 A banker by profession and a fanatic of technology. Community manager for the Wikimedia Ghana Usergroup and a Wikipedian since 2012. Felix Nartey was born in Tema, a suburb of Accra where he currently resides. Felix is a trainer on open technology tools, a member of the core team of the Firefox Africa Group and youth activist who believes in the potential of the youth in unearthing revolutionary talent for the benefit of Africa. >> Linkedin profile 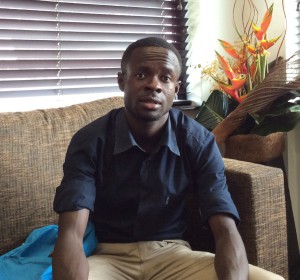 Raphael is an entrepreneur and an open source activist.Raphael has been a Wikipedian since 2012 a very active member of the Ghanaian User Group and has actively worked on most projects by the Community. >>Linkedin profile 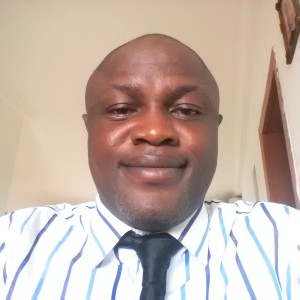 Olaniyan Olushola is a Nigerian Accountant, Financial Consultant,Wikipedian and co-founder of the Wikimedia User Group Nigeria (WUGN). In  April 2014, he was elected Treasurer, Free and Open Source Software for Africa (FOSSFA). He started the first Wikipedia Education Program in Nigeria called “Adopt a School Series”. He is the pioneer Team Lead of WUGN who has been involved in series of community engagement to recruit volunteers. He has participated in several Wikimedia programs including but not limited to Wiki indaba 2014, #Open Africa15, Wiki Loves Africa. 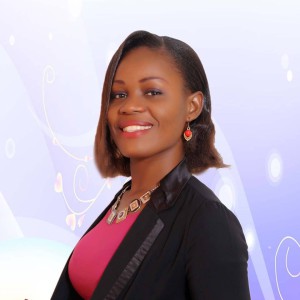 Graduated in Communication, Dominique Eliane is passionate of ICT, media and journalism. She joins the Ivorian Wikimedia’s community in 2014. Since then, she is actively campaigning in the local User Group as auditor. She is also responsible for welcoming and integrating the new members of the Facebook group. For her commitment and the interest attached to the Wiki projects, she has been chosen to lead the Wiki Loves Women project in Cote d’Ivoire. The quote from Henri Frédéric defines her life choice: “The real identity of happiness is the serenity”. >>LinkedIn Profile 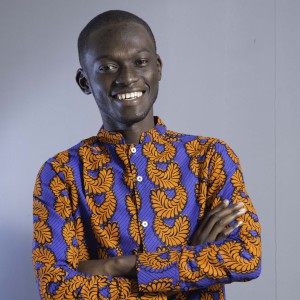 Donatien Kangah is the current Chairman of Wikimedia User Group Côte d’Ivoire. In 2015, he became “BSF young leader” for the innovation in libraries in Sub-Saharan Africa. He had been selected by the french NGO Libraries Without Borders because of the “Ivory Coast GLAM project”, which aim to connect African libraries with Wikimedia Community in order to capitalize African knowledge through Internet. Social entrepreneur and content editor, he is also the cofounder of the first Association of Ivorian Bloggers. With his web agency E-voir, he won many individual and collective prizes among which the Ashoka Emerging Young Leader 2015, IYF Fellow 2015, Innov4Africa 2014, Best Community Manager of Côte d’Ivoire 2012, etc >>Profile LinkedIN 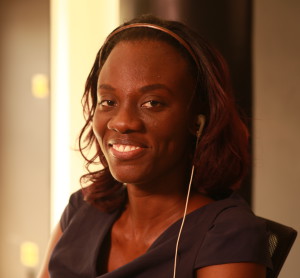 One day, while using Wikipedia for her research, Carine discovered that she could also become a contributor to Wikipedia. She got in touch with the local User Group (Wikimedia Community User Group Côte d’Ivoire) to join their training activities. In 2015, she became vice-chairperson of this association in order to take part more actively in the promotion of the Wikimedia’s projects in Côte d’Ivoire. Among her main contributions are the article of Paul Sika, the Wikimedia Cookbook and the Wiki Loves Africa photo contest. As copywriter, she continues to use Wikipedia in her daily researches >>Profile LinkedIN 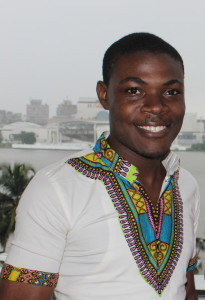 Emmanuel Dabo is a PhD candidate in Information and Communication Sciences. “Social Media and Citizenship” is the theme of his research. Furthermore, he is Communication Director of Studio Futuris, and also Communication Assistant at the Swiss Center for Scientific Research in Côte d’Ivoire, part of the Africa One program.

His encounter with Wikimedia goes back to approximately 3 years. He considers it as a “citizen” project, for it gives individuals the opportunity to promote free knowledge and thus contribute to strengthening the intellectual abilities of everyone.

Member of Wikimedia Community User Group Côte d’Ivoire, he is involved in the communication working group of the association. He was the former General Secretary of the Coordination Committee. Emmanuel is amonf the elected ones who coordinate the Wiki Loves Women project in Côte d’Ivoire. >>Profile LinkedIn 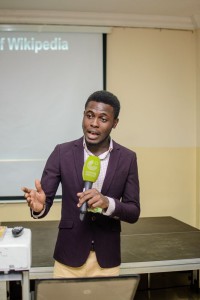 Oyeyele Oloruntoba is an Engineering undergraduate and a budding multimedia entrepreneur, with keen interest in photography and filmmaking. He has been a wikipedian since 2011 and he is a founder-member of Wikimedia User-Group Nigeria (WUGN), currently serving as the Outreach Coordinator for the group. He has participated and helped coordinate several Wikimedia Projects, events and workshops in Nigeria, some of which include: WikiLovesAfrica 2015, Wikipedia at 15, and WikiLovesNigeria 2016, amongst others. 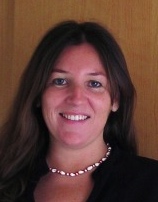 Christine Welthagen, French born, has been working in the UK and Middle East for many years before settling down in Cape Town. Former Head of Foreign Languages Department in various International Schools where she started to familiarise herself with Wikipedia as a teaching tool, she now works from home and dedicates her time to translation work and to participating in projects such as Wiki Loves Women and Wikipack Africa.