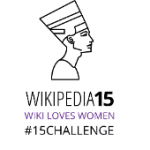 Coinciding with the celebrations around 15 years of Wikipedia, the Wiki Loves Women project launched on the 15th January 2016 with the #15Challenge writing contest on French and English Wikipedias.

A minimum of 15 teams were challenged to write one article each to result in at least 15 articles that highlight notable African women.

The winning articles were:

Wiki Loves Women is a 15 month project conceptualized and run by Isla Haddow-Flood and Florence Devouard in collaboration with the Goethe-Institut,  In 2016, the Wiki Loves Women project will be activated in four countries. The project documentation and its outcome are published under CC BY SA 4.0