The presence of these distinguish guests gave a formal frame to this ceremony and also marked the importance given by the Ivory Coast state to discussions related to the image of women in medias.

The two presenters emphasised on the fact that it is up to women to make their voice heard to defend their image. At the end of these conferences, they presented the Charter for a better representation of women in media content and institutions in Ivory Coast and the press representatives were invited to commit to respect this Charter as their new course of action towards Women’s image. 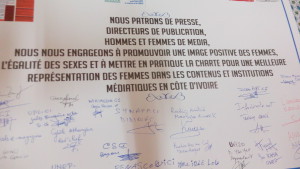 To mark their commitment, they all signed this Charter.