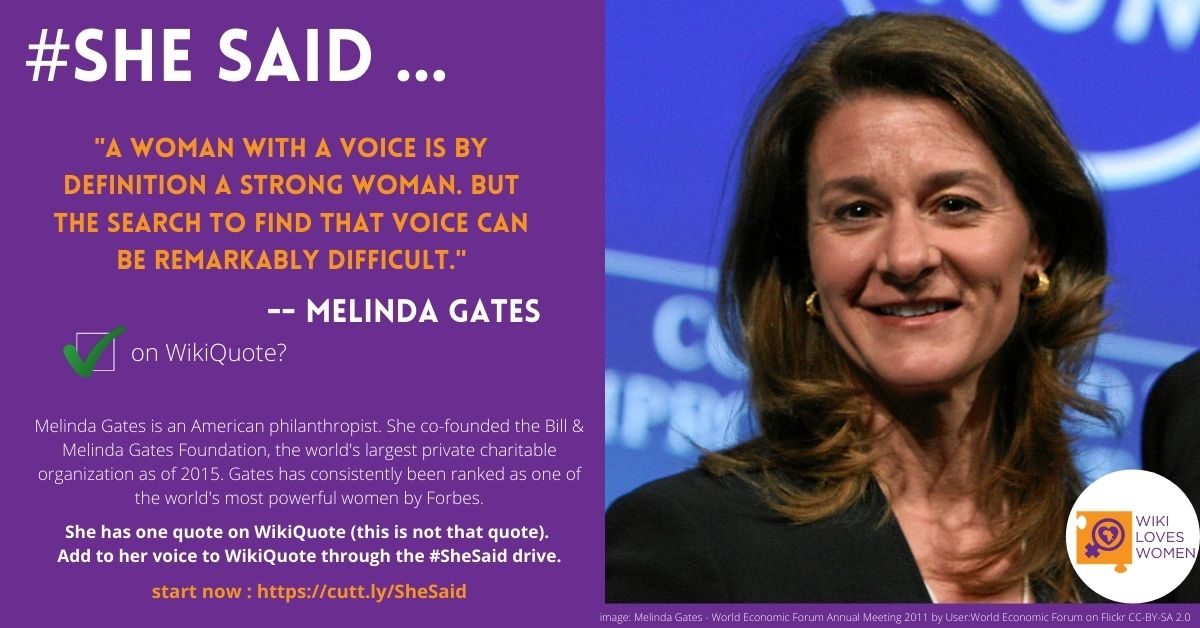 On the 20th October, at the Gender Gap panel for the Creative Commons Virtual Global Summit, the Wiki Loves Women team launched the #SheSaid campaign. The brainchild of Wiki In Africa‘s Florence Devouard, #SheSaid is an online drive across the Wikimedia Community to balance the representation of gender in the entries of Wikiquote.

Over the next 3 months, through the enthusiastic involvement of WikiDonne, Les san pagEs, Wikimujeres and other language communities, #SheSaid took on a life of its own. Seven language communities contributed to the campaign and there were two webinars (hosted by Wikipedia Weekly) in English and Italian. By the first week of January 2021, there were 867 new or improved articles (the majority new) across seven WikiQuote languages.

At the time of launch the gender gap was dire on WikiQuote. For example, on the English Wikiquote main page on 6th of Oct 2020, in the ”Selected people” section… 29 men are featured and only 4 women. Similarly, there are 233 women whose articles have a featured article status on either French or English Wikipedias… with no entry on the French Wikiquote. You can find this result here. Of those women on English Wikipedia profiled by a featured article, 141 women did not have a WikiQuote entry.

The gap is across languages. There are 519 women compared to 3117 men listed on the French WikiQuote.

Obviously we must do something to get notable women’s voices heard … #shesaid was born. We asked that people add quote-worthy quotes of women already featured on WikiQuote, and to create pages to feature those women who were missing. The on-Wiki campaign was accompanied by a strong social media presence across Wiki. Loves Women platforms that started off in English and French and expanded to Italian and Ukrainian as those communities joined the campaign.

The campaign’s impact on the individual language were:

Although #SheSaid was very popular, we acknowledge that there is still a long way to go to ensure that notable women’s voices are amplified across the Wikimedia projects. With this in mind, SheSaid will remain an on-going campaign of Wiki Loves Women. Watch out for flash focuses throughout 2021 – or contribute here!