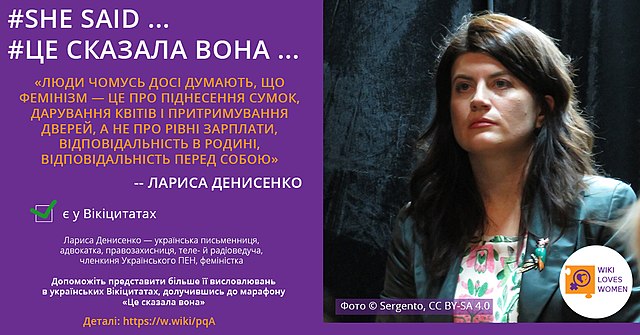 The wisdom of 2,432 women made visible via WikiQuote

Wiki Loves Women’s 2021 #SheSaid campaign was launched in October. SheSaid is a drive that encourages an increase in visibility for notable women’s voices online by adding their notable quotes to various language WikiQuote sites.

Across the 9 language Wikiquotes a collective of 1,514 articles were created. This ensures that 1,514 notable women whose voices and wisdom had previously not been featured, can now be easily accessed. Articles for a further 309 women were improved. In addition, 638 articles featuring notable women were created on Kinyarwanda Wikipedia (Wikipediya mu Kinyarwanda) by the activities of the Wiki Loves Women Focus Group member in Rwanda in collaboration with Wikimedia Rwanda Usergroup.

Below are the stats impact for the SheSaid Campaign across 9 different languages that participated in 2021;

The lack of women’s voices in the digital domain is a global issue, one that we can collectively work on in order to change how women are viewed. By hosting drives such as Wiki Loves Women’s SheSaid campaign, Wikimedia groups focused on gender help to right this historical imbalance whilst growing communities as they learn how to contribute.

Wiki Loves Women is awed by the response and enthusiasm to the second edition of this drive, and looks forward to the third version in 2022! We urge that anyone can join this initiative and continue to make an impact by adding more articles about women. Contribute here!